The Bulls are frustrated.

The Chicago Bulls are one of the worst teams in the league. Sitting at 7-24, the Bulls are second to last behind the Atlanta Hawks in the Eastern Conference. There have been a handful of games this season where the Bulls have surrendered stunning losses. That’s why it’s important to note the climate in that locker room. After being bullied and beaten, the Bulls are frustrated. On Monday (December 17) night, their frustration bled out on the floor.

The Bulls traveled to Oklahoma for what would be a brutal beating. During the third quarter, Kris Dunn started a melee by shoving Russell Westbrook. A foul was called on an unrelated play, and Westbrook can be seen pushing off Dunn defensively. Dunn struck back with vengeful force, prompting Westbrook to step back. Jerami Grant runs up and pushes Dunn, and then Robin Lopez grabs Grant and the two began to wrestle before being torn apart by coaches and staff. Ultimately, Westbrook pulls Grant out of the tussle and the two walk off with subtle smirks as Lopez storms off in the other direction. 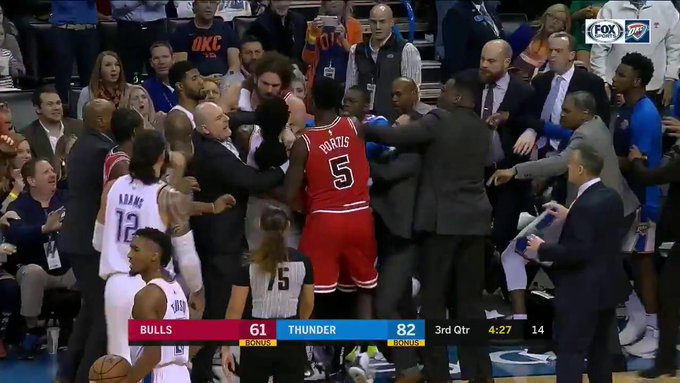 Lopez would go on to be ejected later in the game for fouling Grant and then standing over him menacingly after he fell down. It was a good foul, but Lopez just kept escalating the energy and so the referees let him go. The Thunder went on to win 121-96. 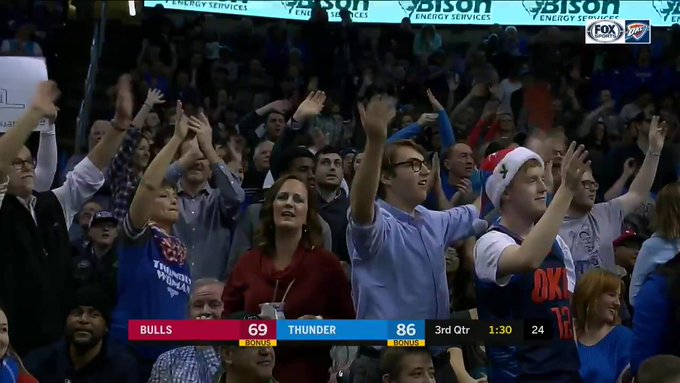 Standing ovation from @okcthunder fans after @chicagobulls Robin Lopez is ejected from the game.#ThunderUp | #CHIvsOKC

33 people are talking about this